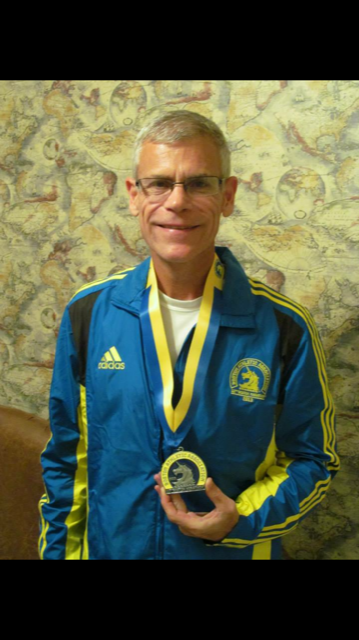 Over the years, I have been absolutely AMAZED at the transformation Rodney Dill has made in his life through running. He did not start running until he was 48 years old after a weight loss competition among his family before his daughters wedding! Now he has completed 8 marathons including qualifying for the Boston Marathon. He is INSPIRATIONAL!

It is never too late to pursue a new passion, goal, or lifestyle change.

Check out my interview with Rodney Dill.

1. How many marathons have you completed?

2. You weren’t always a runner, how old were you when you started running and what lead to the lifestyle change?

I started running 8 years ago (age 48); I wasn’t necessarily aiming for a lifestyle change, it came about more from a month long contest between couples, including my daughter and son-in-law, seeing who could lose the most weight through exercise and diet; I incorporated jogging into my contest routine, and it took off from there; I’ve been running ever since; (it did lead to a lifestyle change, running consistently, eliminating breads, desserts (lot of sugar), and fried foods from my diet)

3. How fast did you run your very first marathon? Which marathon did you PR (personal record) at and what was your time (if you don’t mind sharing)?

4. Which marathon course was your favorite and why?

Two favorites – #1 Chicago, flat course and exciting environment / #2 Boston, the tradition of the Boston Marathon is like no other, the course (and race) has a mystique about it

5. Which marathon course was the toughest?

New York City Marathon – Mile 1, uphill for one mile on the Verrazano Bridge going from Staten Island into Brooklyn; and around Mile 16, uphill on the Queensboro Bridge; that’s the toughest course, the toughest run was the St. Jude Rock N Roll in Nashville, humidity with a temperature over 80 degrees (the only marathon I had to stop running and walk in a few locations); worst time at 3:32

6. What are your top 3 training tips for someone who wants to start running?

8. What do you love about running the most?

A good question, at first I thought it was about competing but that’s not it, although race atmospheres are fun; I’ve run all of 2017 without a race and still kept up a fairly rigorous running schedule; maybe a couple of things, first, running contributes greatly to physical health/conditioning which can make you better for your family or others, in the workplace, and overall quality of life; secondly, running can be a place where you disconnect from the “hurriedness” of things around you, and really think on those things important to you (for me, a lot of times that’s spiritual things, like certain Bible verses or Bible teachings); incidentally, that’s the reason I’ve chosen not to use headphones when running (I’ve been too close to dog bites, and moving vehicles without headphones); but, I know many enjoy using them

9. Anything else you want to share with our readers?

Running has become a way of life for me; I hope to continue running well into the future.  In fact, some of my family members are becoming inspired to run.  I’ve enjoyed running in many different places that both business and personal travels have taken me.  I’ve had the opportunity to run in the majority of the States and several places outside the States including Canada, Armenian mountainsides, and, most recently, in Israel around the City of Jerusalem, Sea of Galilee, and the Dead Sea.  And to think, all this started with 10 minutes on a treadmill – you never know what might happen.